Warning! The following story was written in February of 2001, so obviously it is somewhat out of date, but still kinda funny, maybe. … Probably not. Sorry about all this.

In case you have been living under the proverbial rock, it seems that Fox has acquired Slayers, but not only that, Central Park Media has nothing to do with it. Which means Fox, or Fox Kids, or Saban (ie: the most unholy anime company since Streamline, could do whatever they want to the show. Naturally, given Saban’s track record (Power Rangers, Escaflowne, Digimon, VR Troopers, most of Fox Kid’s crappy line up), most otaku are cringing in terror at the sheer unadulterated evil that can be done to Slayers, including this otaku. But I decided I was tired of cringing in fear, tired of waiting. I decided to find out for myself what was going down deep in the bowels Saban territory, with only my mazouku l33t ninjitsu skillz to protect me.

And I have come back victorious. Yes, that’s right, I have NEVER BEFORE SEEN SCREENSHOTS of Saban/Fox Kids’ take on Slayers. And I have obtained information straight from Saban’s Head of Saban High Intensity Terrorization (they are the folks you can thank ruining your favorite anime), Satan.

So, without further ado, I present:

Apparently like Escaflowne and Cardcaptor Sakura, Saban has decided to take the route in making the male main character and make him into the MAIN CHARACTER, period.

And given their newfound freedom to rip it apart however they can, Gary is now a super-intelligent, awesome knight that fights for good wherever he can. Score!

Which of course, begs the question… what happened to Lina?

From the S.H.I.T. Head himself,

“Rina is Gary’s spunky kid sidekick, and also a fierce magician. We here at Saban are actually quite proud of how we have thoroughly destroyed the Lina Inverse people know and love. Rina is just as spunky as Lina, but now she is 11, with dreams of being a grown-up. However, people keep calling her a child, which makes her angry. We think that younger kids can really identify with Rina. I know I do!”

In case you thought this could get any worse, you’re quite wrong. Why?

Because Saban is making Zelgadis black. As in African-American black. No, he’s still a “rockman”, as Satan puts it, but in his original human form, he’s black.

The reason? To make it more ethnically diverse. Though never mind he uses voodoo and talks in ebonics.

Oddly enough, compared to most of the other character changes, Amelia’s are very little. She’s only 18, and a high priestess, and not a princess, but she still has that whole warrior of justice bit. I guess one can take what little graces that are given.

Not much is known about X, besides the name, though it seems that he may or may not be Gary’s long lost brother that ran away from home when Pops wouldn’t let him race anymore but he won’t tell Gary because that’s a secret.

This one seems to be pretty self-explanatory. Rezo was the “main” villain in slayers, so is Fresno the main villain in The Mystical Adventures of Gary Lightblade. Though it should be noted that Fresno is a dark wizard, not a red priest.

Strangely enough, Nagha is completely unchanged from Slayers to The Mystical Adventures of Gary Lightblade. Apparently Saban thought, given her proportions, Nagha was an American character anyway. In fact they plan on trying to put her in as much as possible, taking stuff from the OAVs and movies and editing it into the TV show.

NEXT: The known plot and digital editing

Of course it should be obvious given the character changes, the plot has been given the same loving treatment.

“Well, we soon realized the problem with Escaflowne,” Satan the S.H.I.T. Head responds, “was not that we changed it, but it was because we didn’t change it enough. With The Mystical Adventures of Gary Lightblade, we plan to thoroughly destroy and change Slayers in any and every way possible to alienate the hard-core anime viewers. After all, it is what we do best! :)”

And alienate they do! Here is current still-in-development show synopsis.

Again, this synopsis is still in development.

But I was able to confirm that any imagery that involves Gary in a dress will be taken out. Gary is a heroic knight and doesn’t stoop to such poor tactics.

Of course seeing what digital editing has transpired in such shows as Escaflowne and Tenchi Muyo, Slayers will have some digital editing. Luckily (or perhaps unluckily), I have obtained before and after shots of some of this digital editing. 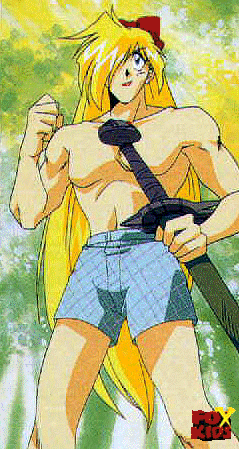 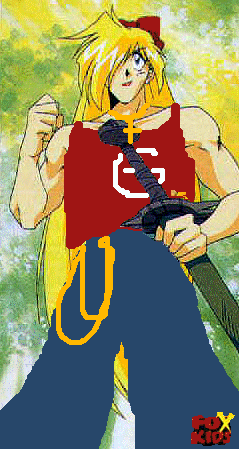 So, in conclusion, we are frankly, in deep trouble. But hey, now that you know, you can at least prepare those mail bombs and email petitions ahead of time, right?

But in case you think you have it bad, think about what Lina and the others must be thinking about. Here was the  response once we told them:

(Basil is a humor anime columnist that has been serving the anime community since last Tuesday. He also has been praying for 3 days straight.)