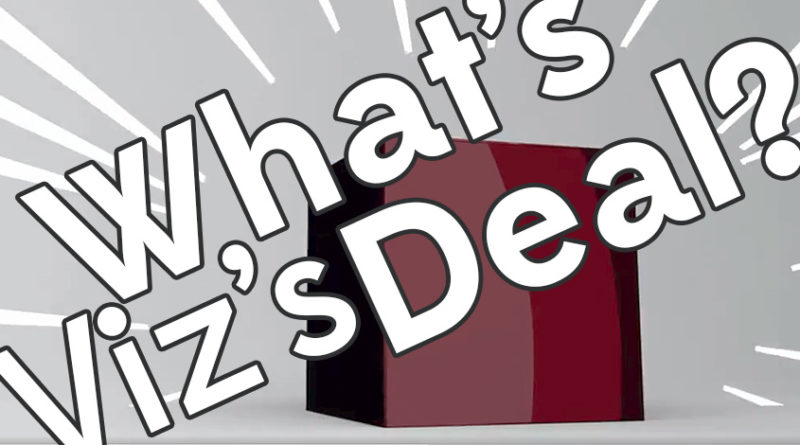 Because I sure don’t!

Today as of this post, Viz Media has unveiled a weird ol’ box of a video:

So… I don’t know Viz. Do you know Viz? I mean, I thought I knew Viz, but then they thought Neon Alley was a good idea and that turned out GREAT. In that… It was not a good idea at all, and at the end of the day now they just redirect you to Hulu. So, here is yet a whole new way to confuse, anger, or possibly even elate their audience? And what do we have to go by?

A red box, to be exact. But not just any box! A box that changes colors, and even bounces around and even goes wire framed! It’s all very exciting, even if it is just a box. So let’s go through the many variations of the box and see what we can come up with.

Variation One: A Metallic Red Box

OK. Hm. Yeah, OK. Still a red box. But it’s kind of… shiny? Metallicy? Definitely got some shading here, bump-mapping, you know, technology stuff. Maybe this is the Viz that we know now? The Viz of Before. The Viz that releases anime, and manga, and does that pretty well. But not a Viz that has bigger dreams, higher aspirations. A Viz like…

OH MY GOSH nine seconds into this and things are going crazy! Did you see that! The box, like, hopped for second. Clearly, this is a box that can’t stay still! It is a Viz that has been cocooned for far too long, and must burst forth like a wondrous butterfly! I wonder what this could mean for Viz???

Frankly, the future is clear as day. Microsoft has now purchased Viz Media, with the aim to make the Xbox One even MORE of a multi-media console. Because who needs video games anyway? Not when you can have 4K MANGA AND ANIME. Wait, do they even make anime in 4K? Let alone manga? You could certainly create the stuff in 4K but… Hmm. Maybe this is just some Boruto texture pack for Minecraft. I guess. Kinda boring though. Wait, we are only thirteen seconds into this thing! We aren’t even halfway done! What other treasures does our Minecraftian Red Box hold for us?

No not uh… MangaBox. That’s a Japanese digital manga platform owned by DeNA! I mean, SURE they host manga published by Shogakukan, who owns Viz Media. But… wait. Maybe this means that Viz is going to take the English MangaBox platform, and actually do something with it?! Besides hosting some random assortment of first chapters of manga like (picks one at random) Fling Girls? Or even a whole new simupub manga subscription service?! Nah, can’t be! Because in REALITY it is:

Ok. Maybe Viz Media wants to get into video game publishing? Maybe that’s it. I have no idea why, as Bandai Namco makes and publishes the vast majority of the Shonen Jump games anyway. Maybe they could translate visual novels? Bleh. That’s boring. (Or not, maybe that’s your deal! You do you!) No, clearly they see the rampant success of VRchat and VIZ WANTS IN. Come to the lush lands of ONEPIECchat to hang out with your boy Luffy, or explore the vibrant school life you could never have in WENEVERLEARNchat! Or perhaps, while you can’t taste the amazing meals in FOODWARSchat, they sure look good, huh?

Or maybe it’s just a new loot box because it’s not like we have a dearth of them or anything. Or maybe they are unveiling an even NEWER Neon Alley, which is STILL only one Xbox 360 and only plays reruns of only the filler Naruto episodes. Frankly, anything’s possible. I don’t know Viz.