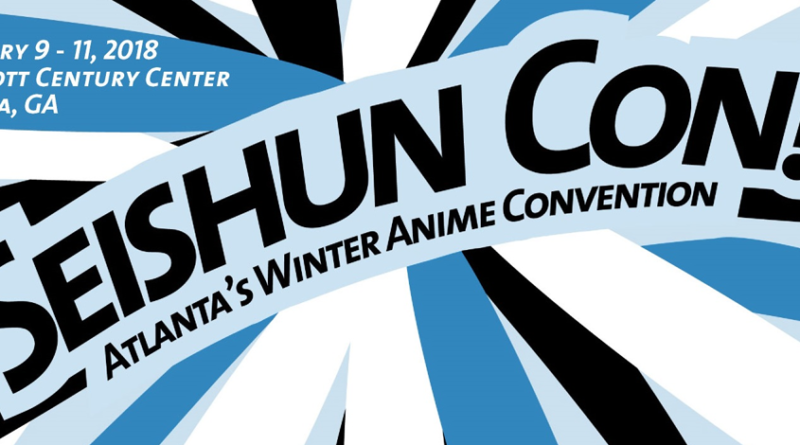 Why hello there 2018! We only just met, and there are already a ton of anime cons out there! Really, it’s getting nuts. As is the usual case in BasilTime, I’m going to a whole bunch of cons this year as well! In fact, my pals over at Third Impact Anime just wrapped things up over at Ichibancon!
But I’m starting off the year right, with one of my most favorite cons of the year: Seishun Con! February 9th-11th, 2018 in Atlanta, GA~

Now, let’s be honest here. I am in no way impartial. Some of my bestest buds over in Atlanta both founded, and still run the con to this day. I was even technically a guest for the first year of their con… Mostly due to them making a couple of “guest” badges and needed someone to use them. And that’s OK, because they are awesome people, and run an awesome show. And I am lucky enough to be able to help out by tossing them some panels every year. So let’s get to them this go around! (All schedules subject to change at the whims of fate.)

This panel may just be my most enjoyable one to run. You see, I have a problem. A manga problem. I read a ton of it. In fact I may, at this point in my life, spend more time reading manga than watching anime. (I probably can directly blame Ed Chavez for that!) So I suppose it should come to no surprise, that I love sharing all these various Japanese comics that read with everyone else. And surprise! I bought I think, eight different volumes of manga to try just the other day? So there is sure to be some new series to talk about in February!

Oh snap a guest spot! My boys at Akihabara Renditions are hosting a roundtable discussion all about podcasts! And since I have one, I guess I gotta go! It should be fun. I’m sure there will be people talking into microphones… Just like podcasts! Although, I guess I better see if we can update the OSMcast! some point soon…

Chances are, you know me. I mean, you are on this website! So, you probably know I have somewhat an affection for this video game. Some might call it an obsession. Let’s just call it what it really, truly is: A lifestyle choice. And I’m fine with that. All said, it really is both an amazing MMO, as well as an amazing Final Fantasy game! And with Patch 4.2 just now dropping right before the con, it’s one of the best times to talk about it! And boy, so we shall! Come learn all about the MMO that shouldn’t be as good as it is.

Whoa, where did Saturday go?! Maybe I spent it going to other panels. playing video games, or something! Pancakes? Who knows! But what do I know? Where you can find anime and manga online, and legally no less! This is a panel I tend to do every year, every con, and every time I do it something has changed in between cons. Like for example, Anime Strike, an Amazon Channel is now not an Amazon Channel because Amazon killed it. Now those shows just come with Amazon Prime. And on top of that, Amazon just raised the monthly cost of Prime. So there are some slides to edit! Also HiDive has become slowly more of a thing that it was even a few months ago! Plus, who knows what tomorrow may bring! I tend to edit this panel the week of the con, to try and keep it as up to date as possible.

So there’s my panels for Seishun Con in 2018! Hopefully people show up and they go well! And maybe, just maybe, I’ll see you there~