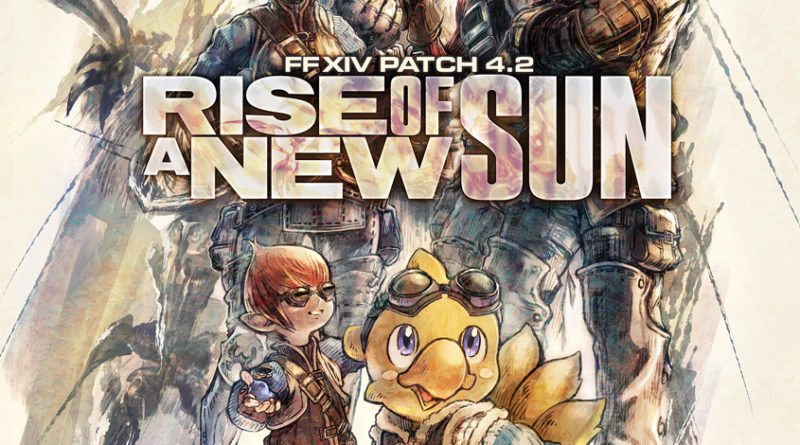 Months in the making, desperate souls seeking that sweet, sweet drip of fresh-cut new Final Fantasy XIV content do not have to wait much longer!  Patch 4.2, Rise of a New Sun, is coming on Januray 30th, in the Year of Our Yoshi-p 2018! Aw geez, that’s not far away at all! I better get that into my planner, so I don’t forget!

And boy o’ boy, what a patch this shall be! We going back to Doma since just because we threw off the yoke of oppression, doesn’t mean it’s easy sailing! I’m sure we’ll have all sorts of twist and turns in the coming quests. But we are also getting a new 8-man raid tier set of Omega, new glamour options, a new best tribe, and a whole bunch more! It’s so much, I’m just going to give you five things I’m hyped for. But boy am I hyped!!! Here we go!

Thing Number One: Guys Alpha is Kinda Cosplaying Cid and I Can’t Handle It

I mean look at him, all dolled in Ironworks! So cute! I’m going to hate hate hate the fact that he’s probably the final boss of this whole raid set and I’m going to cry all the tears. Just all of them.

The new set of Omega looks super neat, though! And like many an American nerd in my thirties, a whole set of raids based off of Final Fantasy VI is extremely my nostalgic jam. And yes. Of course I am hoping we get to suplex a Phantom-y Ghost Train. These things are all super good! My only regret is that this means that it won’t be a Primal, which means no train egi-glamour for my jalapeno pepper.

I’m not even sure how these saddle bags work! They expand your inventory, but they only hold certain kinds of things? But 70 brand-spanking new slots is nothing to sneeze at, and if they have to expand our inventory in some weird ways, sure! They are expanding! More inventory, the better! I just hope there is someway to maybe send all the things that can go into saddle bags on a right click. Just get all that stuff in there, fill that sucker up real fast.

And then there is this whole Glamour Sets thing? You take outfits and turn them into things logged into some crazy glamour server you can then create whole outfit sets with? I think? I’m sure it will be easy enough to use, and will make all sorts of sense once I get into it. But for now, it just looks all sorts of both sparkly, and confusing. But what kinds of glamours are we going to stuff in there?

OK, so really I’m just glad that they found a real purpose to the Crystal Tower, now that we have cleaned it all up from heinous monsters from beyond the Void and all. I mean, haven’t you ever teleported into Mor Dhona and thought to yourself, “Seven Hells, we spent like, a bazillion patches and months taking out that dumb evil dude and his weird multi-wolf headed wife! Oh and that punchy guy, and don’t forget the guy in that hat! We killed him too! Stupid hat guy. But now what? It’s still just standing there! All crystal-y. Man, if only there was some way to re-purpose it. Like a PVP Arena!”?

Alright, I’d admit, I don’t think anyone was thinking PVP Arena when they looked at the Crystal Tower. Except someone on the dev team sure, did! So now we get to go fight in there again, for honor and glory. And togas. Togas!

Elephants! Griffins! MAGITEK CLAWS THAT THROW THE HORNS WHILE CARRYING YOU LIKE A DEJECTED PUPPY. Or tissue paper. Maybe the claw has some giant robot it belongs to that could really use a good sneeze. But that’s not the only form of transportation that Patch 4.2 brings! I know at least one FC member that should be thrilled that there is going to now be submarines to build along with airships to send out places! Maybe Eureka turns out to be underwater?

Could it be? Possibly! We all knew that in the last major patch when they introduced Shirogane, it was going to be a bloodbath. It had to be. Even though it was a ton of houses, there was no way it was going to keep up with demand. But even so, the dev team seemed really off-put on just how bad it really got. So it’s really refreshing to see them, not only adding in whole new wards pulled with delicious piping hot plots, but also including very needed changes to how the whole thing works! Things like, making sure Free Companies get first crack, and the FCs having the minimum required number of member to be able to buy in the first place. Also making sure it’s now Account-based per World, and not just character. Killing reselling by randomizing when a house goes back on the market.

Even going so far as to launching a whole new website to go into further details before the new wards hit. Also, waiting a week till after the patch before the hosing goes up, so we can all enjoy the patch before the next set of hosing wars kills the servers. All good things, and props to the devs for going the extra mile. I hope it all works out!

No really! While I really enjoy how they make nice and fancy trailers to get us all hyped up for the upcoming, patch?  What I really look forward to is Zelpa’s comedic take on them. And, as always, she does not disappoint. Be sure to watch to the very end~