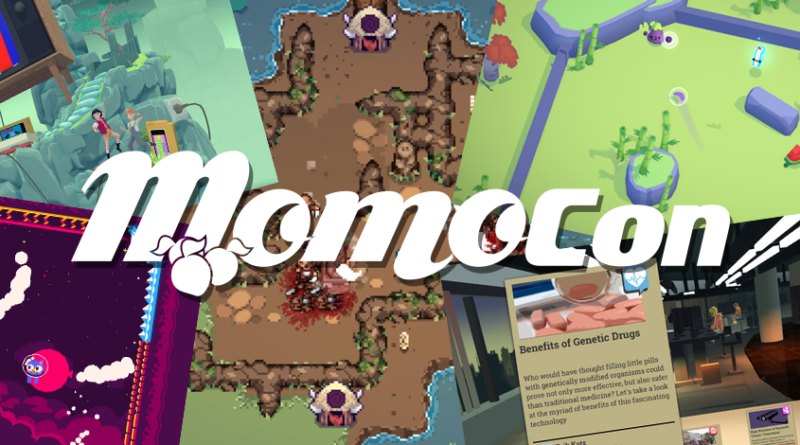 Let’s start off with some disclosures here. I was one of the preliminary judges for the 2019 Momocon Indie Awards Showcase. Now, I cannot talk about my actual scores. But I liked a whole bunch of them! And if you want to see the full list of finalists, they have them listed here. (Some of them are going to be here as well!)

But when I was walking the actual show floor, I discovered that several of the games I judged weren’t there! So I wanted to highlight a few indie games that I did get to play, but the studios couldn’t make it out. Here we go!

So looking at their twitter, Cranky Watermelon calls Boomerang Fu “A couch multiplayer game about slicing and dicing your friends with boomerangs by @paulkopetko and friends.” This is a pretty accurate description of the game, and as Paul Kopetko is from Australia it makes sense why they were not at Momocon in person this year. That said, this was the one game I really wanted to be there so I could show it off to my friends.

It’s a somewhat isometric/top-down perspective game where you run around getting powerups and try to take out your pals with boomerangs. You are also cute fruit people who blow up all juicy and nice when you get sliced. The power ups are neat, the game controls really well, and I cannot wait for the full version of this game to come out.

A game by Unbound Creations, Headliner: NoviNews is a game all about controlling the news, and how one controls information can shape the opinions of people around you. While I have yet to get the chance to play Papers, Please, the feeling I get when playing Headliner pretty much tracks with everything I heard how about people felt when playing Papers, Please. You get the chance to choose what stories get talked about, and your choices determine how well your publication does. But it also determines who likes you, and who wants you to suffer. Because the world Unbound Creations has built is not a nice one, and things can (and will) happen.

The game is also super slick with excellent art direction, the controls work well, and man the game gets tense sometimes. I was planning to take an hour session when I first booted it up, and come back to it after trying out some other games. Instead, I played for several hours. I also came back to it later. This game is very engaging.

Another really nice game from folks in Australia! Between this, Golf Story, Boomerang Fu… Why aren’t we noticing how good a place Australia is for making games? Is it because so many things want to kill them, they stay indoors and just make amazing games for my amusement? Maybe! But man, The Gardens Between by The Voxel Agents is pretty. It’s also a mind bending puzzling adventure that deals with time and friendship.

You play as two friends who are traveling the trippy surrealism that is their dreams. And you don’t control them, so much as you control the flow of time around them. As you can move time back and forth, you can also trigger events to happen that changes how the friends interact in their environment. Which is where all the puzzle solving comes in. The Gardens Between is very much one of those kinds of puzzle games that are confusing then you get that Ah-HA! moment where you feel like an absolute genius. The game is also out on pretty much everything, so you should at least pick this one up on one of the things.

BATTLOON, as a word, is pretty dang fun to so say. The game is also pretty charming and fun, too boot! It’s made by a studio named well, noname studio. As far as I can tell, they are from Japan, and published by Sony Music Entertainment. For the Switch, Windows, and Mac, and not the PlayStation 4. Which is weird! But I can also see why. It’s all about local multiplayer, and for that the Switch is both King and Queen.

You play as a variety of pixelly balloons, and the goal is knock the balloons that are not you into spikes. Whomever is the best balloon knock into spikes balloon wins! It’s a simple 2D area affair, but the various balloon you can choose have different weights and speeds and that all figures into how you play the game. But don’t worry, as all the balloons are super cute. It’s simple, easy to grasp, and is pretty cheap! BATTLOON is a fun time.

Look, dwarfs are cool. I’m pretty sure that’s a universal truth. And sometimes, trolls (while also cool) can be jerks. I don’t really want to say all trolls are jerks. But the trolls in this game, Dwerve by Half Human Games, are very much jerks. That want to kill you and all your dwarven buddies. That’s no good. Thankfully, Dwerve is also a tower defensey, dungeon crawlery kind of game where you get sweet traps, turrets, and things and use them to fight off the trolls. Pesky trolls!

And if you hear me out there Half Human Games, some good controller support would be amazing. But the pixel art atheistic being used is just sublime, it’s got a lot of character, and I am super hyped for this game… even though tower defense is not normally my thing? Then again, Sleep Tight really charmed me, so maybe it has me primed for some hot dwarf turret action.

So hey, while you are joking around on twitter about how good/lame/middling this year’s E3 is (I will be too don’t worry), here’s five games I’m very much looking forward to playing now or pretty soon from now. Maybe you’ll find one you’d want to play, too. But if you need even more Momocon Indies coverage, please check out my podcast were we talk about a whole slew of games that were on the Momocon show floor!